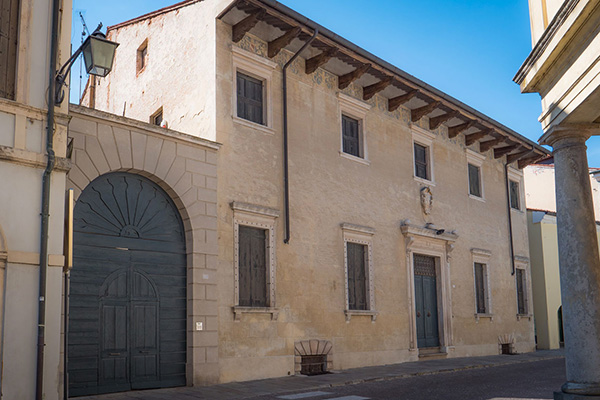 Pomello Chinaglia Palace was built in the 1300s, just outside the original walls of Montagnana, later enlarged by the Carraresi, to be used as a home and a military fortress. The construction differs from Venetian architecture for various elements(such as the projectingroof truss and the frescoes with crests of noble families under the eaves),revealing an Umbrian structure in all its splendour. The building was home to the wealthy Bocarini Brunoli da Leonessa bankers, the family of origin of Donna Jacopa, who married worthy captain Erasmo da Narni, known as the Gattamelata, and continued to live there together with her five daughters.Other illustrious families inhabited the palace afterwards (like the Gatteschi, the Da Montagnana and the Basadonna). Around the end of the 1400sthe building became property of the San Polo branch of the Pisani family, as shown by the well-preserved stone coat of arms with a lion rampant placed above the entrance portalin the middle of the facade. The Pisani later moved to the Villa outside Porta Padova, designed by architect Andrea Palladio. In this period Montagnana welcomed important artists besides Palladio, such as Veronese and Giorgione, as one can see from theirartworks in the wonderful Cathedral of the Assumption (Duomo) of Montagnana.
During the 1700s the palace was acquired by the Chinaglia, a family of landowners and later industrialists, from which Luigi is particularly remembered. He was born in Montagnana in 1841 and he worked to the benefit of the community, doing his best, among other things, to findfinancial support for Saint Benedict’s Women’s Boarding School and give impulse to the local economy. Indeed, it was thanks to him that the important – and still operating -Padua-Monselice-Mantua railway line was built. After being actively involved in the Wars of Independence and the unification of Italy (so much so that even Garibaldi and King Vittorio Emanuele II were given hospitality in his house), he embarked on a brilliant political career,whichbrought him the office of President of the Chamber of Deputies in 1899 and Senator of the Kingdomin 1905. When he died with no heirs in 1906, his surname was joined with that of his sister Mari Chinaglia married Pomello, from which the surname Pomello Chinaglia derives. The palace is currently the property of the Pomello Chinaglia family, which respectfully preserves the testimonies of those who have been connected with the palace throughout the centuries.