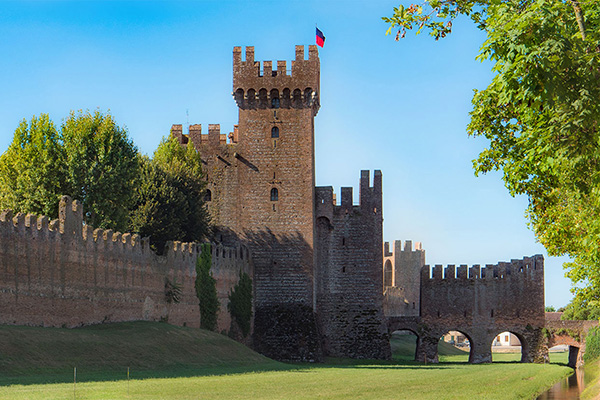 In the two-year period 1360-1362, the Carraresi erected this perfect military fortification along the western side of the town, which was clearly weaker than the others. Surrounded by water both externally and internally, it must have originally looked as a real island with a dense forest and a majestic stronghold rising from it.  It consists ofa tall central keep, a tower and a hallway, which was accessed only through a complex defensive system made up of four drawbridges, two portcullises, barbicans and four swing doors. The two internal areas, which have now been turned into parks – that of the former Youth Hostel and that of the current Piazza Martiri della Libertà, were at the time two large pits of water forming a small lake.A Youth Hostel was housed in the Rocca degli Alberi from 1964 until recently.Of the coats of arms of the Municipality of Padua, of Francesco the Elder Da Carrara and of the Carraresi, today only the Antonian cross of the Municipality of Padua is visible, since the others were deliberatelydestroyed by the Venetians when they conquered the town in 1405, to erase all signs of previous dominations.